How’s it going?  Work has been pretty crazy. I finally had to do a little work last weekend/stay late on Monday to finish up some reports, which is fortunately not something I have to do often.  I’m playing catch up this week with my PM certification and studying for my exam. And I’m teaching a class on Friday, so I’m rehearsing for that in the evening so I can sound authoritative and knowledgeable instead of  ¯\_(ツ)_/¯  I’m going to be so happy when it’s Friday and I’m all done with the week!  My brain is tired, but then I think of my dad getting three (!) degrees, all with a full-time job, when my brother and I were kids.  Studying for an hour after work doesn’t seem all that bad when I put it into perspective.

We’re supposed to be hiking this weekend with some friends, which I’m excited about. I’ve been really craving hiking lately.  We’re going early so we can beat the awful heat.  Last week the temperature was consistently 105 and 110, which, no. Stop it.  My friend initially wanted to hike Enchanted Rock, which I was all for since I hadn’t been there before.  My husband, who has, was like, “Yeahhhhh but we’re all going to die of heat stroke, there’s no shade there. And it’s a long trail.”  I decided to do a little research myself, thinking we’d be okay if we went early (sorry, Husband), but sure enough, park rangers are tweeting ominous things like, “Hey! The temperature at the surface of the Rock is 133 degrees!” or, “We’ve had to do a lot more heat rescues lately,” or, “This place is really dangerous unless you come very early in the morning! Maybe consider rescheduling your visit to the fall!”

So, that settles it. No Enchanted Rock until the weather cools.  But I picked a state park pretty close by that I hadn’t been to before.  It looks like it will be really pretty, so I’m excited.  We can’t bring Apollo, unfortunately.  He got sick again after I took him on a hike two weeks ago (thankfully, not full-blown gastroenteritis), so I’m thinking that these hikes are too stressful for his little body. Even with water breaks, even with me acting as his puppy chariot so he doesn’t have to walk the entire time. Poor little guy 😦 He’s going to be so mad at us when we go hiking on Saturday without him. Hopefully a Starbucks bye-bye afterward will placate him.

Still trying to get back into shape. I’ll do a short run after work once or twice a week.  I’m okay running if it’s 100 degrees outside (I keep it short and slow), but it feels dumb to run in anything hotter than that.  Yoga has still been somewhat of a struggle as I regain my strength.  My lips are sunburnt and my hips hurt for some inexplicable reason this morning…I think because of my run on Tuesday.  This is 34, you guys! WOOHOO!

I need to get to work, so let’s see some pics real quick!

(I have only three pictures actually, so let’s lower those expectations.) 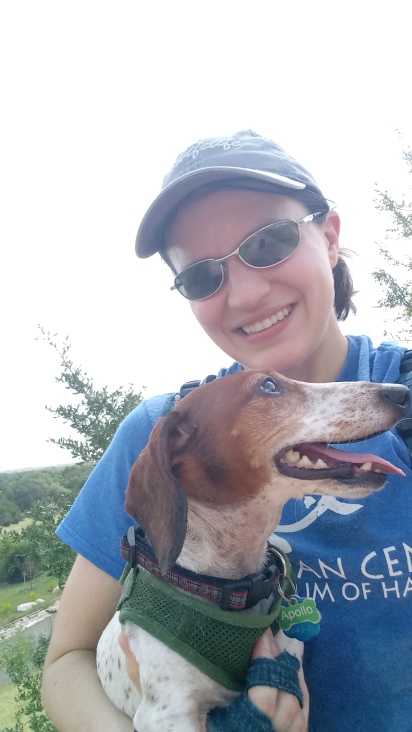 Here’s me and Pup Pup during our last hike!  Cutie looks happy 🙂 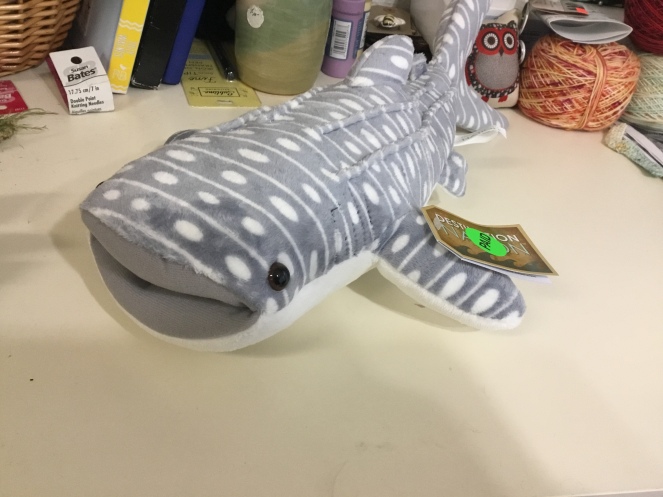 Husband brought back this cute whale shark toy from an aquarium he visited in Atlanta…I LOVE IT.  He looks so happy 🙂 (Ignore my mess, I need to reorganize my craft table).

My seaside shawl is getting there! It’s pretty quick and easy.  There’s some counting involved, but nothing strenuous.  It’s a pretty good project when you’re braindead at the end of the day.  I’m sorry, at the end of a long day, the last thing I feel like doing is dealing with amigurumi and counting.  That’s why my teacup is still sitting unfinished.

I have to go to work for real! Talk to you all later!