I know it’s only Monday, but is it Friday yet?  Most of my mental energy has been occupied by work and wedding planning.  But I’ve had some time to sneak in some crafting.  As usual, there is not any real kind of logic to what I’m doing and why.  And of course, right when I sit down with the intent of doing wedding crafting, I’ll pick a completely unrelated project to work on instead, because procrastination, I never learn, etc.

Let’s throw some pictures up in here.

Fiancé and I went to JoAnn on Friday night, because – I’m just gonna say it -we are getting overly ambitious with our plans for our wedding favors.  I mean, I LOVE our ideas, don’t get me wrong, but I’m pretty sure what will end up happening is (A) we will make a couple of prototypes of said item(s), realize how much work it will be, and will be paralyzed by the sheer amount of work ahead of us, and, (B) two weeks before the wedding, we’ll be like FUCK IT and throw jellybeans into mason jars or something.

Anyhoo, JoAnn had all these cute little wooden charms, so I threw a bunch of them into my shopping basket.  Like, there’s no coherent plan on what I’m going to do with these things other than paint them?  Maybe I can elegantly toss them at random friends as I walk down the aisle? I don’t really know.

Sooo at some point this summer (spring? I don’t even know anymore), I took a Sailor Top class.  I didn’t finish the top while in class, but I had TWO MORE THINGS left to do before finishing – “stitching in the ditch” for the collar, and then the bottom hemline. That’s it.  That’s all I had to do, guys.  Yet this top has sat in my basket for at least six months before I finally dug it out and finished it.  While I’m glad it’s done, the stitches aren’t the greatest in the world. I’m just saying. Your six-year-old can probably do a straighter hemline than I did with this top.  But whatever, I was tired of it sitting in the workbasket, so it’s done.  I’ll make a post when I look blog worthy, aka not right now.  (Currently I’m wearing pajama pants with foxes on them and a Mickey and Minnie Mouse hoodie.  It’s a super sexy combo, you guys).

Blanket progress! I actually haven’t worked on this in a couple of weeks. 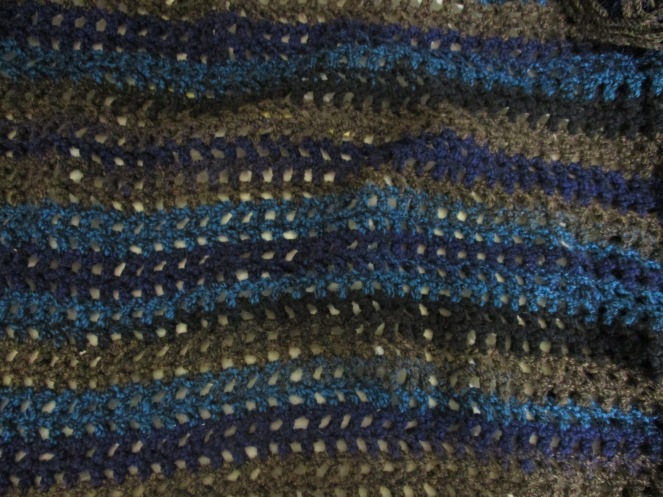 This next project I started during the weekend, because WHY NOT:

You eagle-eyed knitters can probably already spot my wonky slip stitches.  (Actually – the mistake is so glaring that probably anyone can see it.  IT STARES INTO MY SOUL).  But I’m too lazy to fix it. I honestly haven’t properly learned how to fix a wonky stitch, so it’s just going to be like that forever, you guys.  “Only you can see it,” my fiancé kindly told me as I showed him my progress and whined about my various mistakes.  So yes, I suppose only I will notice once it’s finished…but I WILL ALWAYS KNOW.  Yet my laziness overtakes my will for perfection. Sooooo ¯\_(ツ)_/¯

Well, I guess it’s time for me to go- OH YEAH.  This project is legitimately wedding-related.

I didn’t learn how to do French knots until 2015 or 2016, so I tend to get all FRENCH KNOT ALL THE THINGS.  I’m actually not liking how many French knots I added to this piece.  It’s kind of reminding me of this?

Now that I’ve given everyone nightmares, I’ll take this as my cue to exit. NIGHTY NIGHT.